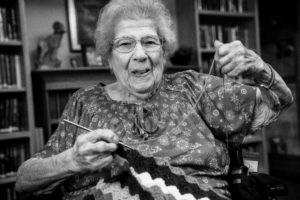 Virginia Hull loves to crochet.  The Immanuel Skilled Care Center resident always has a project in progress, and she frequently carries her yarn and hook with her.  On a couple of occasions, I’ve run into her just as she’s about to leave for or just getting home from a shopping trip to the hobby store to buy more yarn.

It’s a passion that goes back almost forty years.  Virginia began with fine thread crocheting (think doilies and tablecloths), and while she enjoyed it enough to keep up the hobby generally, she really wanted to make blankets, scarves, and other crafts typically created with heavier yarn.  The process is different enough from fine thread work that she took a night class in 1980 in Sidney, Montana, to help her make the transition.  Once she started this kind of crocheting, she didn’t stop.

Family has always been very important to Virginia.  Her parents emigrated from Greece and moved to Grand Junction, Colorado before she was born.  Her father was killed in a mining accident when she was a young child, but she was fortunate to have a very nice stepfather.  The family—including Virginia’s older brother and two younger half siblings—had a happy life in Grand Junction, where Virginia lived until she moved to Sidney for her husband’s job.  Virginia has two daughters as well as one son who sadly passed away as a young man.  “We had a lot of fun,” she recalls fondly when she talks about her children’s younger days.  And her children are the reason why she’s in Kalispell—she followed her daughter here after her daughter moved to be closer to her own children (Virginia’s grandchildren).

Family is also in the foreground of Virginia’s mind when she’s crocheting.  She took up the craft in earnest because she wanted to make blankets for her grandchildren when they graduated from high school.  Other projects include at least 2-3 blankets for each of her daughters as well as a king-size bedspread.  A lap blanket Virginia crocheted for her mother in her nursing-home days now hangs over the back of Virginia’s wheelchair, and Virginia’s work connects the two women even now.

On the day I spoke with Virginia, she was working on a red, white, and blue lap blanket.  She’s not sure exactly who it’s for yet, but it’s sure to find a home with someone who appreciates it.  It might be a little bit before it’s done, though—with the holidays approaching, Virginia has some other projects that have to take priority, so she’s going to be busy.  That’s okay; Virginia likes to be busy.  When I asked her what she likes about crocheting, she replied, “It’s relaxing, but it keeps me busy and keeps my mind working.”

The mischievous smile on Virginia’s face in her photo gives you a small glimpse of her engaging personality.  She was a pleasure to talk with, and I look forward to seeing more of her and her creations around campus.

When you donate to the Resident Care Fund, you help make sure that Immanuel continues to be a place where seniors can pursue their passions for as long as possible.