I’d like you to meet Delsie B.  90-year-old Delsie has lived at the Immanuel Skilled Care Center since 2014, when a stroke made it impossible for her to care for herself. Delsie is beautiful inside and out; her beautiful smile, smooth skin and well-cared-for clothes are only outshined by her positive and happy demeanor. Today, I want you to learn more about Delsie so you can get to know one of the many wonderful residents who calls Immanuel home. 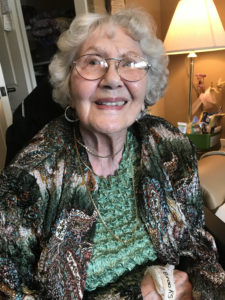 on the Highline and was one of seven children in a Mennonite farming family.  She fondly remembers her childhood and her eyes light up as she recalls a time when she and her closest sister, Betty, fell down a snowy hill on their three-mile walk home from school.  Who pushed who is still a lively debate between the two.  After graduating from high school, Delsie moved to Glasgow.  While there, she met Bob, who had just been discharged from the army following World War II.  It was love at first sight and they married after a whirlwind two-week courtship!

Bob’s family was moving to the Flathead, and the newlyweds joined them.  At first, Delsie worked in a dress shop while Bob pumped gas.  As the years went on, they were blessed with three daughters and two sons.  Delsie ran a daycare in her home so she could bring in money while also caring for her own children.  During this time Delsie, who had always loved to draw, taught herself to paint.  Oil paint remains her favorite medium, though she’s worked in watercolors, too.  The 2017 Immanuel Lutheran Communities Christmas card featuring one of her paintings (shown above and below) is only the latest honor for her award-winning work.  Her room is decorated with examples of her artwork going back decades.

Delsie has had some hard times.  After 50 years of marriage, Bob passed away.  Since then two of her children have also passed, and another has developed serious health problems.  So when she had a stroke that made her unable to care for herself, Delsie came to Immanuel.  When asked what she likes best about Immanuel, Delsie says it has “the best people.”  She calls Keisha, her favorite CNA, “darling,” and says she’s “a lovely girl.”

Delsie’s story is unique, and every resident who lives at Immanuel has a unique story.  That’s why the Immanuel Foundation blog will regularly feature residents’ stories.  The sum total of wisdom and life experience housed at Immanuel Lutheran Communities is truly astonishing. At the Immanuel Foundation, I get to meet amazing seniors like Delsie and raise funds to make sure they keep getting the care they need, and I want you, too, to have a chance to meet some of the people your donations help.

You can help Delsie!

When you give to the resident care fund, you help residents like Delsie live vibrant lives in engaging and supportive communities.