The Joy of Music: A Passions Project Story 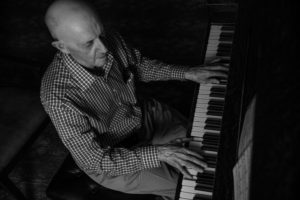 When I walk down the hallway between Buffalo Hill Terrace and The Villas, where The Passions Project photos now hang, I am struck by one particular quality all the photos share.  Each photo shows a resident finding joy, often in an activity they’ve done for a large part of their life.

That is certainly the case for Buffalo Hill Terrace resident Ken Larson.  Just the other day, as my coworker and I walked through the lobby of the Terrace, we heard piano music (Christmas carols, of course!) coming from the auditorium.  When we peaked in to see who was playing, we saw that it was Ken.  This isn’t surprising, because Ken has been playing various pianos at Immanuel Lutheran Communities for the last twenty years.

And he’s been playing other pianos for much longer than that.  Ken started playing when he was a child growing up on Michigan’s Upper Peninsula.  There was always music in his family.  His mother (a schoolteacher) often played the piano for pleasure, and his father was a barber—who sang in barbershop quartets.  Ken’s childhood piano teacher was a woman who had emigrated to the United States from Cornwall, England.  That he enjoyed his lessons is made clear by the fact that he’s never stopped playing.

As a young man, Ken joined the United States Army, and he was sent to Korea just after the end of the war.  Though he was an infantryman, at the time he was there, his unit needed a piano player for church services.  Ken’s talents made him a perfect candidate for the job, and he spent the next sixteen months on this assignment.

After he came home from Korea, Ken got a job in timber management and sales administration, which eventually brought him to Montana.  He never gave up playing the piano because playing music continued to bring him joy.  At times, he’s also sung (baritone) in a barbershop chorus, but piano is what he’s stuck with most consistently.  Ken’s favorite music to play is music from the 1920s, including songs by Walter Donaldson, Irving Berlin, and Gus Khan.

Since he retired in 1982, Ken has spent even more time playing music.  When his father was in a nursing home in Whitefish, Ken saw how much all the residents there enjoyed music.  He formed a band, the main purpose of which was to play music for nursing home residents.  His current band is called Razzamatazz.  It includes a cornet, saxophone, drums, and a singer, as well as Ken on piano.  They play for nursing homes and retirement communities around the Flathead Valley.  Just this week I heard them playing Christmas carols for the residents of the Immanuel Skilled Care Center and saw how much the residents were enjoying them.

Ken plays music because it brings him joy.  It brings just as much joy to his listeners.  A few weeks ago, I was talking with some residents about a concert at the Terrace that afternoon.  Because the music was a recent addition and wasn’t on the calendar, they weren’t sure who it was.  “Is it Ken?” they asked me eagerly.  That time, it wasn’t, but he’s played for them at least once since, and his performances are always eagerly anticipated.

And in case there was any doubt about how committed Ken is to bringing joy to others through music, I’ll share that he donated the beautiful baby grand piano in our new auditorium.  From the beginning of our search for a piano for the new space, Ken was an asset.  He helped us decide what size of piano to get and consulted on the brand and selection.  When we chose the piano that’s there now, he told us he wanted to donate it to the community, showing his generous heart.  Thank you, Ken, for all you do to bring joy to seniors in our community and beyond!

Give the Gift of Joy

Join Ken in giving the gift of joy this holiday season by donating to the life enrichment fund.