A Passion for Woodcarving 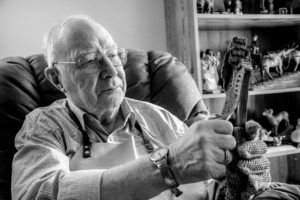 Today, I’d like to introduce you to Clyde Pederson, the first of many Passions Project participants you’ll be meeting over the coming months.  Clyde’s passion is woodcarving.  If you look around the Buffalo Hill Terrace apartment he shares with his wife, Jeanine, you’ll see everything from bark houses like the one pictured above to whimsical carvings of mucus (yes, mucus).

When I asked him what he likes best about wood carving, Clyde replied, “It’s a good hobby because it’s portable…  You can carve any place you can sit.”  The number of carvings in the apartment alone suggests that he sat and carved in a lot of different places.  Jeanine would certainly say this is the case, though he most often carved in their home.  “His passion was woodcarving,” she recalled, “and my job was vacuuming up wood shavings!”

Clyde began carving when he was in high school.  He still has his first carvings, a tiny ball in a box and an interlocking chain.  But he had a lot more time to carve after he retired from his work as a farmer.  When he and Jeanine were camped at an RV park, they came across a fellow camper who was carving small boots.  Clyde was inspired to take up his own knife and chisel, and a passion was born. Also, he had lost the sight in his right eye and had reduced depth perception, so when he was considering a hobby to pursue in his retirement, carving seemed safer than the kind of woodworking done with power tools.

Clyde never took a class in woodcarving.  Instead, he used books.  He even learned the intricate art of bark carving from a book.  However, it’s sometimes difficult to use pictures as precise examples, especially with bark.  He emphasized this when he taught bark carving during his and Jeanine’s winter stints in Arizona.  Sometimes, he said, it was hard to explain to his students that carving isn’t just about replicating what you see in front of you.  “You can’t duplicate a [bark] carving because the bark dictates what you can do,” Clyde told us during his photo session.  “You have to be creative.”

Clyde certainly is creative!  He took his inspiration from everything in the world around him and from the wood in front of him.  Local wildlife has inspired carvings of deer, elk, and bears, while pharmaceutical commercials have inspired more whimsical pieces like toenail fungus and, yes, mucus.  Clyde carved what he saw in the wood.

Sometimes, Clyde bought the wood he used in his carvings.  His favorite wood was basswood.  It’s soft, fine-grained, and white, which makes it versatile and easy to carve. He also used material he found locally, especially when carving bark.  The banks of the Flathead River provided a lot of trees with good bark.  For bark carving, Clyde explained, you need a tree that’s been dead for long enough that the bark is loose.  It’s also important that it be thick enough to hold together when carved but not so thick that you have to cut too much away.  Some of his carvings were even inspired by found objects or trash.  He’s made a series of ducks out of old wooden golf clubs—showing that one man’s trash is indeed another’s treasure!

Clyde isn’t able to carve much anymore (a hand tremor makes it unsafe), but he still talks about it with great pride, and it’s clear he’s passionate about it.  When he put on his protective gear and picked up his tools for the photo, it was like he’d never put them down.  Clyde’s carvings are unique and special, and it was a pleasure to learn more about them—and him!

All 19 Passions Project photos will be unveiled at the Immanuel Foundation Launch Party on Thursday, October 11 at 5:30pm. Click the button below or call 406-752-9243 to RSVP. We hope to see you there!