Across the Country and the World–Together 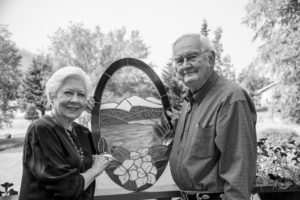 Villas residents Fred and Shelby Thompson aren’t from northwest Montana, but they love it here.  In their photo, you can see a stained glass piece they made together that symbolizes their two homes: Montana, symbolized by Glacier National Park’s Lake McDonald, and Alabama, symbolized by a pink camellia.  They first came to Glacier nearly fifty years ago.  On that first trip in 1969, the couple decided they would eventually move to Glacier Park, and decision that came to fruition when they built their first West Glacier house in 1997.  Both still speak with gentle, light Southern accents, but it’s clear from their West Glacier home (where we met them this past August) that they’ve put down roots in Montana.

Fred and Shelby’s journey together started when they were in high school.  They were high school sweethearts who married soon after they graduated.  In those early days, Fred worked construction, first as a plumber and pipe fitter and then as a ceramic tile setter.  Shelby worked as a bookkeeper and the two of them made their first home in a travel trailer.  Later, Fred went to work in the family laundry and dry cleaning business.  In fact, the couple first came to Glacier so Fred could run the laundry at Glacier Park Lodge.  Shelby remembers that summer fondly—it was the only extended period in their marriage when she didn’t work.

As time went on, both Fred and Shelby moved on to different jobs.  The couple never had children, and they always supported each other in their careers.  Eventually, Fred established himself as the Production Superintendent of a paper and cardboard company.  The plant where Fred worked specialized in boxes for chicken products—so now I think of Fred whenever I eat Chick-fil-A nuggets.  Meanwhile, Shelby made her career in the US Department of Agriculture, where she worked first for a program that made loans to local farmers and then specialized in rural water systems, including water towers in remote locations.  At the time, her achievements were unusual for a woman, and Fred was always by her side.

Along the way, they had a lot of adventures.  Both Fred and Shelby had pilot’s licenses—a choice Shelby made so she could ensure that the couple could always fly safely–and one of their favorite things to do together is travel.  Maybe that early travel trailer was a foreshadowing of things to come.

Over the course of their 64-year marriage, Fred and Shelby have visited all seven continents together.  They’ve seen the wildebeest migration in Kenya and Tanzania and the penguins in Antarctica and have been on 14 river cruises throughout the world.  Though they reached their goal of visiting all seven continents when they set foot on Antarctica in 2006, they continue to travel as much as they can, and wherever they go, they have as many adventures as possible.  In Antarctica, Shelby took the Polar Plunge.  Fred chose not to dive in to the freezing ocean, but he cheered her on from dry, if not warm, land.  They visited East Berlin in the 1970s, where they remember seeing actors portraying happy citizens on their tour, and recently got a bit overheated in Beijing’s Forbidden City—though they don’t regret the trip.

It’s important to Fred and Shelby that they explore and develop personal connections with the places they visit.  They make friends wherever they go, and sometimes they reconnect with people they met on trips.  They’ve also visited faraway locations for personal reasons.  They went to China because they have an adopted great niece from that country and wanted to know more about her birth culture.

The Thompsons have certainly seen a lot in their lives, and as they move on to the next chapter, they’re happy with where they’ve been and where they’re headed.  “We’re getting old and we know it, but we look back and we don’t have any regrets,” they told us when we interviewed them for their photo.

When you donate to the Resident Care Fund, you help make sure that Immanuel continues to be a place where seniors can pursue their passions for as long as possible.